Rise of the East is a Red Alert 2: Yuri’s Revenge modification by ayylmao/XxpeddyxX inspired by C&C Generals that aims to deliver a dynamic multiplayer experience to the player by offering exclusive features, artwork and fast paced yet balanced gameplay. Version 2.1 introduced the East Asian Alliance to the battlefield, version 3.0 introduces another brand new faction, the Global Liberation Army, bringing exciting new gameplay styles and all new mechanics to the table.

Single Player modes deliver an enhanced AI experience thanks to the Phobos engine extension as well as C&C Generals missions remade in the RA2 engine. To top it off the RA2 and YR campaign missions are also available and remastered with new mechanics, weather effects, all new assets and AI updates.

The mod also pushes the engine to its limit in order to create exclusive new features such as permanent upgrades, unique unit abilities and special battle effects/statuses, allowing the player to improve low and high tier units alike, ensuring they do not fall off at any point in the game.

To keep the list short, here's the basics to expect: CNCNet

Created by Rampastring from Dawn of the Tiberium Age mod, this client allows C&C games such as Tiberian Sun and Red Alert 2 to be launched without the need to open the game first, further expanding ways mods can deliver a better user experience.

The client also makes creating and finding multiplayer games an easy task, with large ingame map previews, easy game mode implementation, new client features such as teaming up at lobby for Tiberian Sun and much more.

Rise of the East originally used a fork of the CnCNet client made by Kerbiter for its various new features which has since been merged with the main branch.

We currently use a modified client which combines the latest CnCNet client with Starkku's improved updater, allowing for significantly faster updates via the client thanks to its file compression system. The client also lets players to download addons at any time including new soundtracks and mission cutscenes.

I recommend checking out the following github pages to learn more about the client:

ReShade is a generic post-processing injector for games and video software developed by crosire. Imagine your favorite game with ambient occlusion, real depth of field effects, color correction and more ... ReShade exposes an automated and generic way to access both frame color and depth information (latter is automatically disabled during multiplayer to prevent exploitation) and all the tools to make it happen.

Rise of the East comes with 5 shader presets for you to pick from, to begin open the client via REClient.exe, click on Options and ensure that the 'Enable ReShade' option is ticked and click Save.

Press the ‘home’ key on your keyboard to access the ReShade menu.

Please note that ReShade is GPU/CPU intensive so it is not suitable for all machines, I strongly advise you research about the feature first before using it.

Below are some examples of RotE's ReShade profiles at work (click to enlarge): 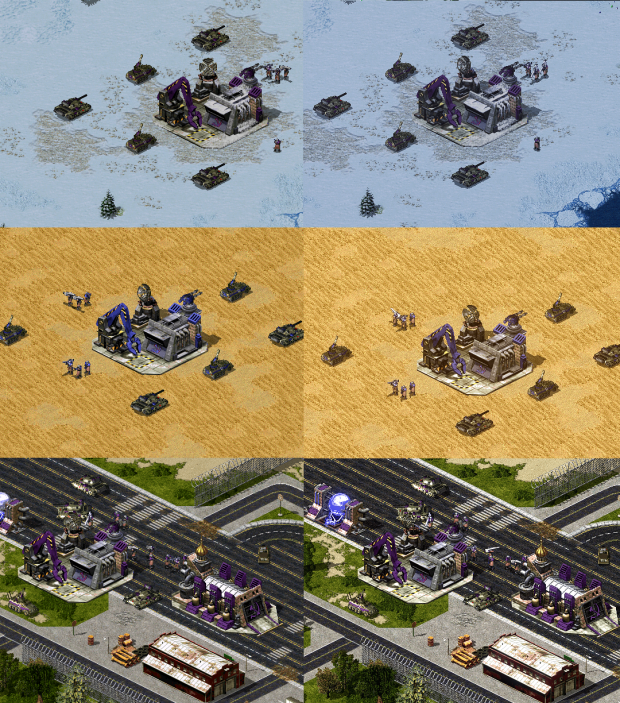 Below is a list of all mod MIX files and what they hold. Rise of the East is a public mod with only one protected mix, which is because these assets were exclusively made or donated to the mod. Public use or display in other projects is not permitted. For a full list of private and public assets please visit the readme.txt file here.